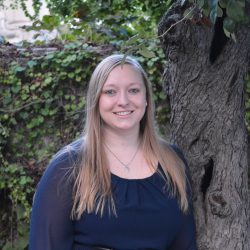 I’m from the small town of Artesian, South Dakota. I attended Sanborn Central High School in Forestburg, South Dakota and graduated in 2011. Music has always been part of my life and I knew from a young age that I wanted to pursue music as a career. I was an active musician in both instrumental and choral ensembles in high school. I also went to contest for choir and band as a soloist and as a member of several ensembles. In May of 2015, I graduated Magna Cum Laude from Northern State University with a Bachelor’s Degree in Vocal Education. I participated in multiple ensembles at NSU including Concert Choir, Chamber Singers, Early Music Ensemble, Marching Band, and Concert Band. I was also cast in several musical and opera theater productions while attending NSU. I furthered my undergraduate activities as a Student Instructor for Music History as well as Treasurer for both Sigma Alpha Iota and ACDA. I was also a member of NAfME and College Democrats. Upon graduation from NSU, I continued my studies as a graduate student at the University of Minnesota Duluth. I was one of two graduate students to be admitted to the program. While attending UMD, I gained a vast amount of performing experience through the opera program. I was also part of another vocal ensemble called the University Singers while attending UMD. I graduated with my Master’s Degree in Vocal Performance in May of 2017. In March of 2017, I was accepted into Chicago Summer Opera. This is a pay-to-sing program in which I received a generous scholarship and more opera roles than anyone in the program. From that program, I gained rich experiences that led me not only my new voice teacher, Allan Glassman, but to the Chicago area to pursue my professional career. I moved to the suburbs of Chicago in the summer of 2017 in hopes of pursuing my professional singing career. I’ve been singing with Sinfonietta Bel Canto in their productions of Puccini’s “Il Trittico” as a Midinette in “Il tabarro”, La Suora Infermiera in “Suor Angelica”, and lastly as, not one but two, pant roles in “Gianni Schicchi”. Before Covid-19 hit our area, I was also cast in their production of “Hänsel und Gretel” which has now been postponed until it is safe for us to perform again. I’m now entering into my second year at IMSA (Illinois Math and Science Academy) as their full-time Choir Director.