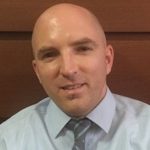 Dr. Cross holds undergraduate and graduate degrees in religious studies and ancient history. After spending eight years working in South Korea, Taiwan, and the Philippines, he returned to his native state of New York to study ancient history at The Graduate Center, City University of New York (CUNY), where he earned his Ph.D. in 2016 for work on classical Greek interstate alliances. Before coming to IMSA, he was the coordinator of Classics, Greek, and Latin at Queens College, CUNY. His research interests include Greek and Roman history, interstate relations, ancient religions, numismatics, historiography, and Greek and Latin languages